British Airways serves over 160 destinations, including six domestic. It is one of the few airlines to fly to all six permanently inhabited continents.

British Airways operates one of the largest and the most modern fleets of any airline in the world. 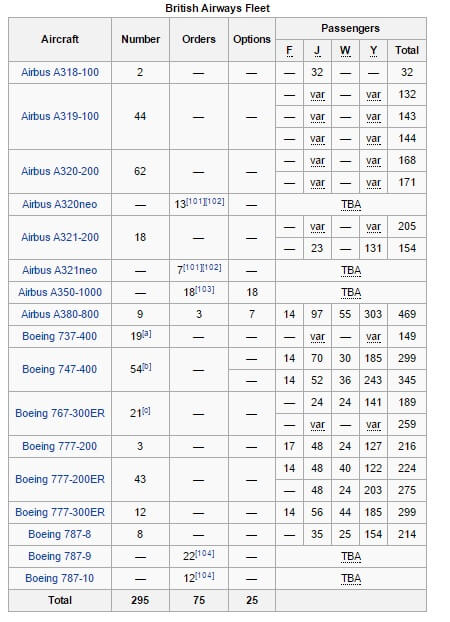 Ruling the skies since over nine decades, British Airlines is one of the much talked-about carriers in the world. It provides complete comfort and lavish facilities, which gives it an edge over competition. It is a part of International Airline Group (IAG), the world’s largest aviation group.
Once you step on board you’ll see how the care and attention to detail of their design team has resulted in a cabin environment that’s sophisticated and contemporary, giving a reassuring sense of wellbeing and comfort.

You can use the search on top of this website to book your tickets.

The benefits of booking with British Airways include:
• Inclusive fares
• Free food and drinks on all flights – click here for details
• Free seat selection within 24 hours of departure – click here for details
• No charge to pay for bookings by debit card
• No charge to check-in
• Flights to mainstream airports, close to the destinations customers want to travel to
• A generous free baggage allowance, or, on European routes, customers can choose to book a hand baggage only fare, while still benefiting from free drinks and snacks and free seat selection within 24 hours of departure
• Day trip return fares to popular European destinations

Passengers who are flying in the economy section can choose complimentary dining or premium economy dining. The airline also offers business dining, first dining and specialty meals. Kosher or Muslim food items are available on flights operated by Comair, but passengers must notify the airline of their special meal request 48 hours before the flight leaves. All other specialty meals must be ordered 24 hours before the flight. Specialty dining includes meals for vegetarians, children and diabetics.
British Airways Entertainment.
There are many luxurious services are provided to customers on boarding. These services give a wonderful relaxation to passengers. The main luxurious services include meal service, hot breakfast with tea and coffee, and entertainment services like Disney and the Cartoon Network for junior flyers, TV programs, games, audio books, music and radio. All World Traveler seats have a personal screen (no charge for headphones) showing the latest films. High Life is the name of BA’s in-flight entertainment. It’s stellar with movies and TV and a great Skyflyers Kids’ zone.
British Airways features more than 130 movies, 650 TV shows from around the world and some 550 audio albums and 225 radio shows in its in-flight entertainment systems.

BRITISH AIRWAYS HAS IT COVERED FOR SKY-TECH SLEEP EXPERIMENT
British Airways has begun testing a hi-tech blanket which changes colour using brainwaves, to ensure it offers customers the best flight’s sleep in the sky.
The ‘happiness blanket’, which is woven with fibre optics, uses neuro-sensors to measure a person’s brainwaves and changes colour, from red to blue, to show when they’re at their most relaxed and meditative.

For details on customer reviews and opinions on British Airlines visit the link below.